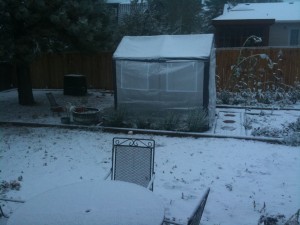 Here it is, arriving suddenly.  On Thursday, it was still Indian summer, sunny and hot.  Today is Saturday and that season has fled.   This is a wet snow, and won’t stick. Next week, it will be warm again—but instead of collecting a few more roses, another couple of squashes, I will put the garden to bed for the winter. Cut down the frozen stalks of corn, compost the wilted squash, the frost killed tomatillo, so prolific that I am secretly glad I won’t have to figure out how to use 10,000 more of them.

When I first looked out this morning, on the wilted, frozen plants that have been my companions all summer, I felt melancholy.  The summer is gone for certain now.  Another swift move of the calendar, this very particular summer, this sweet year of my new garden–gone.

And yet…I knew the freeze was on the way, so I found this little greenhouse at the local big box gardening spot.  (I had planned to buy PVC pipe and build one—this is ever so much better, and only a tiny bit more expensive.)  It’s lightweight, and easy enough to assemble that I did everything but the cover by myself in about 2 hours.  It would have been less, but I mixed up two parts and had to redo them.   It’s not all battened down just yet—I had hoped to do that today, but it will wait until Monday or Tuesday now, when the weather will be warmer again.

Stepping into that protected world last night, where the tomatoes are growing, and some more potatoes, I felt a sense of deep quiet.  Here, I can extend the season, both now and in the spring.  Here, I can have a secret stash of fresh, home-grown tomatoes and herbs. It’s too late this year to do it, but in the future, I can plan what the greenhouse bed will hold and provide myself with more herbs and fresh edibles, and create a place of puttering solace for the winter, at least part of it.

Gazing out at the snug little greenhouse, I felt sweet anticipation creeping beneath the melancholy, edging it out of the way.  After a break of more than two months, the girls in the basement woke up and peered over my shoulders, yawning and scrubbing their eyes.  “Hooray!” they cried. “It’s the writing season! Make some cinnamon tea while we get dressed.  We have lots of stories to tell you.”

Another season begins—fresh and unmarked.  So it is.

8 thoughts on “The Turn of the Wheel–writing season begins”