It is a lusciously gloomy morning here in Colorado, and despite the long list of tasks that are calling me (the tamales, the wrapping of gifts, walking the dog), I find myself drawn here, to write.  The subject almost doesn’t matter—the desire is simply to be here and put some words on the page, capture something.

Last week, my friend Heather and I went to Chimayo. It’s a tiny strip of settlement along a two lane highway leading into the mountains from Espanola. You may remember the mention of these places from The Lost Recipe for Happiness, and I will say that it was oddly 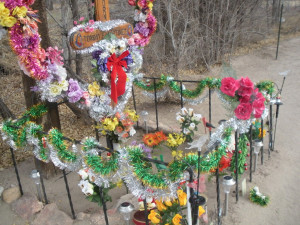 disorienting to see again all the places that inspired the book—the elaborate descansos, some now lovingly decorated for Christmas, the arroyo that saved Elena from bleeding to death; the wide open field behind the Santuario where I imagined her companions bidding her farewell.   It was like visiting another part of my life, a me I once was.

Heather and I were there to make vision boards, which is simply a poster-sized collection of words and images to represent goals and desires for the coming year. We wanted someplace quiet—and got it.  The Rancho de Chimayo hacienda is an old inn, with the rooms built around an internal courtyard in traditional hacienda style. A friendly white cat with black patches on her ears and paws visited us.  We had no television. No radio.  And horror of horrors: my iPhone did not work. No texts. No phone calls. No compulsive checking of emails every ten minutes.  It was wildly uncomfortable at first, and then we both grew into the quiet.

The first night, the only restaurants in town were already closed and the B&B had nothing, so we traveled back down the road to a convenience store where two tall blonds stood out like bright yellow lights among the small dark men.  Sometimes I’ve felt slightly afraid in Espanola, but not that night. The clerk was friendly, and one of his customers joked with us about our purchases—bottles of water and a can of prepared tuna salad and guacamole chips.   I had tucked away some good cheese and bottles of beer and Izze sodas for the trip, so we had those, too, and it was a decent supper. We cut out photos and started arranging our vision boards in the utter silence, and went to bed early.

In the morning, we both we ready to leap for more civilization. Breakfasts both mornings were very good, carried to our room on trays, with tiny oatmeal muffins and juice and pretty fruit the first day, a giant blueberry muffin and good yogurt the next. 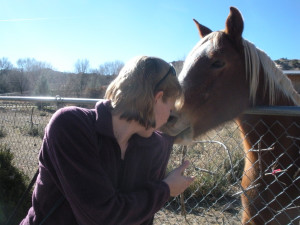 That first morning visited the Santuario, which is one of only a handful of pilgrimage sites in North America. (You can read the story here.) It was only a few hundred yards up the road, and there we mulled spiritual things. I found small gifts for my Catholic son and friends who would appreciate the holy dirt. I shot photos and then spent a long quiet time in the chapel.   I found Heather, who is the queen of animal charmers (and believe me, that takes some doing in my world) making friends with a dog and a horse.

And then, like the city women we are, we bolted for Santa Fe. Heather had never been and I was delighted to show her around, thinking we could eat at my favorite diner, The Plaza.  First, we wandered around the La Fonda hotel, which is a very old, sprawling hotel with a beautiful restaurant in the middle.  Heather asked if we were eating here, and I realized I’d never tried it—I always eat elsewhere in Santa Fe.  “Another time,” I told her, and we headed for The Plaza.

To my dismay, it was closed under renovations.  Not only was I disappointed that we couldn’t eat there, but even more that the restaurant I loved would not exactly be there the next time I visit. No more the kitschy little booths, the old diner style in red and turquoise, the spirit of Route 66 lingering in the old tiles on the floor.   While I recognize things cannot always stay the same, I’m hoping that they’ll preserve the spirit of the old restaurant.

So we ended up at the La Fonda restaurant after all.  We sat by the fountain and I shot photos of the handpainted window panes that 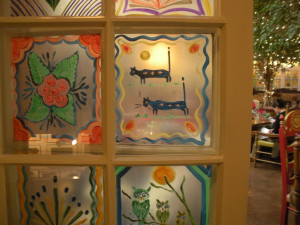 give the room its unique beauty. Light floods into the room. The menu had some northern New Mexico dishes, but my eye was captured by a spinach tart, puff pastry over sweet potato puree and topped with spinach and goat cheese. It is an elegantly balanced dish, and I’m sure a person who likes beets would have found even that note charming.  I left with the resolve to recreate the dish, and to have traditional northern New Mexico food at dinner.

We wandered the shops in the mild afternoon. I noticed again that Santa Fe is genuinely graying—far more people in their sixties than their twenties or thirties. I also remembered that love Santa Fe style architecture and decoration, the color and splashy details, the coexistence of buildings to earth and sky.  I should live in a Santa Fe style house someday.

Back in Chimayo, we had an indifferent meal at the local restaurant. Nothing was terrible, but nothing was particularly interesting, either.  Back in our room, we rigged up music through my iPad (and discovered we do not have the same tastes in music at all—since she likes mainly modern country and that might be the only form of music I don’t really know very well).  In the morning we made a second visit to the Santuario. I talked with the old priest, a tiny very old man with a Catalan accent, who told me he was “95 years old, soon to be 100!”   I bought Chimayo red chile, and a rosary made of turquoise and silver.

Our last meal was on our way home through Santa Fe to catch I-25, at Café Pasqual, and it was the best of the trip.  A chile relleno that 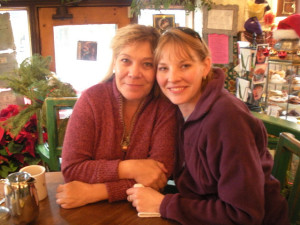 might be the best I’ve ever eaten, delicate and not overwhelmingly cheesey, and a black bean and roasted corn tamale, that inspired me to give this version a try. I don’t even like black beans, and have an aversion to corn in things, and it was marvelous. We took a picture to remember the day, and drove home in a blustery day, across the vast, empty landscape with its harsh mesas and faraway mountains, talking and talking and talking and talking, which is what one does on a road trip.

It was quite fine. We agreed we will find another place for this trek next year, and make our vision boards again together.

Postscript: my vision board was not quite finished, and I wasn’t quite sure what I was waiting for.  It sat on a table in my family room for several days.  During the eclipse on the solstice, I awakened at exactly 1:48 and went outside to discover the shadowed amber moon at full eclipse.  I went inside, finished my vision board, and came back outside to see the bright white edge of blazing moon emerging from the shadows.  Magical!

Do you love Santa Fe, too, or some other place you like to go eat?  Do any of you set goals by using a vision board?

7 thoughts on “Feasting and friendship in New Mexico”