When I was a child, I loved going to  summer camp.  Girl Scout camp in canvas tents with wooden floors, or much more often church camp (probably because it was very inexpensive and my parents had four kids) in cabins housing 20 girls.   It was the highlight of the summer—getting ready, gathering shampoo and following the list of “recommended” items to bring.   I always brought dark green Herbal Essence shampoo, a heady smelling liquid that’s nothing like the watered down version they sell now

We were only there for a week, Sunday to Saturday, but it seemed that entire lifetimes took place during those days.  Romances and friendships built and lost, discoveries about self and place uncovered, dreams forged and reinforced.  On the last day, we all had our group photo signed, and hugged each other as if all was lost, and cried our eyes out.   In the backseat on the way home, I was silent and distant, lost in memories, crushed that it was over for another year.

Back home, it was a slam back into everything ordinary.   The ordinary green telephone on the wall.  The ordinary food.  No singing.  No long deep discussions about…well, anything.  For days, I would be lost in mourning, sure I would never, ever have a good time again.

As an adult, I’ve come to appreciate coming home to ordinariness, but I still love getting ready for a trip, making a list, checking things off, packing special totems, creating rituals.   I learned during those weeks at camp that every journey was a lifetime and I was changed by each one.  Sitting in the meadow at La Foret Camp (which is, ironically, only about a ten minute drive from my current home—it wasn’t even very far away in those days), I dreamed a life for myself.  I learned to connect to other travelers—my fellow campers—and I learned to think outside of the box, challenged by counselors to make us do just that.  (I also learned just about every folk and bible and church song known to modern woman—and you would think that my fellow pilgrims would have appreciated that on the Camino.  Somehow, they liked listening to Bethany, the trained professional opera singer better.)

Before I left for Europe in June, my creative well was very low indeed.  I wouldn’t say dry, but a voice shouting down into it would echo for a long time before hitting water.  It’s a normal part of the process, and probably because of the loss of my Sasha and the long months nursing her, I was a little more weary than usual.  I also had that nagging knee injury, which is not terrible, but is sort of…annoying, you know?

Whatever the reason, I was empty and sick of working by June. The great luxury of a writing life is the time 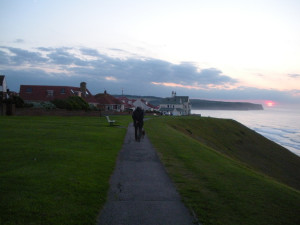 to go wandering.  I went to camp, first with CR to England and then with a group of women on the Camino, and I still wasn’t finished, because then we went to Orlando, where I spent the first half with my dearest writing buddies, and the second half with CR, playing at Disneyland.

Not only did I wander and chat and think about life in small and large ways, I read like a junkie, popping one book after another in a wild lust for story.  Australian writers, English writers, a bunch of Americans.  Fiction and non-fiction.  Adult and young adult.  Spanish and English. Reading, reading, reading, reading.

What I did not do is write.  I kept a journal, as always, and I wrote the odd blog post or Facebook missive, but other than that, nothing. I didn’t think much about writing, either, and when ideas started pushing into my imagination, auditioning for the next spot, I shoved them away.  Once in awhile, I took a note or two on my phone. Once in awhile, I woke up and thought, “Hmm, that has some merit.”

Mostly, I ignored every single one of them.

The well is overflowing.  I’ve been in a working frenzy, sometimes working on two different things in a single day because when I’ve reached the end of the juiciness on one project, I find there is energy and excitement left for another bout, so I change locations and start work on the other one.   One morning, an idea I’ve been shoving away for about two years awakened me and dragged me to the computer and didn’t let me go until well after lunch.

It’s lovely.  It’s like going to camp and getting the good stuff afterward, too.  Filling the well is always, always worth it, and I haven’t been taking enough time to do that.  Not at all interested in travel for a little while, you understand, but I am going to go to movies a couple of times a month, and play with my collages (which I realized recently don’t have to be about books all the time) and water color pencils.  I’m taking cello lessons.

Did you go to camp as a child?  Do you fill the well with travel or by some other means?  What hobbies give you that sense of exuberance, whether or not you are a writer?

7 thoughts on “The Reward in Going Away”