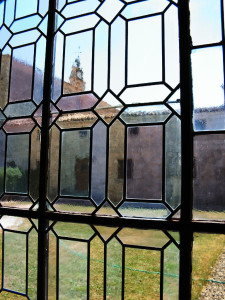 I keep resolving to be better about the blog.  It isn’t that I don’t enjoy it–I do.  It’s just that lately it seems there are a million beautiful places for you to fill the well, and I want to make a post that is meaningful and real and good every single time.   But that hasn’t been happening, and anyway, it’s counter to my entire philosophy of showing up and doing what’s mine to do today.

With that in mind, I’m going to drop the Impossible Standards and get back to just blogging about whatever I find compelling or interesting or annoying on a given day.

Today, I’m thinking about travel.  About Spain and England, about walking the Bristol channel and sitting on trains with my notebook, looking out the window, letting the well get filled.  I’ve wanted to go to Spain since I was a young teen, studying Spanish with the plump, white-haired Julia Child lookalike who was my teacher.  I can’t remember her name, but I remember that she traveled every summer to some exotic place and always brought things back with her for her students.  She was exuberant and cheerful and despite the fact that I was in my utterly anti-establishment phase, I loved her.   It seemed that it wouldn’t be such a bad life to teach Spanish all winter then travel to some distant land each summer.  She influenced me to consider bilingual education as a major in college, and I probably would have enjoyed it.

In those days, I desperately wanted to travel to Spain.  Not Mexico, not Argentina, not Ecuador.  Spain.  (Despite the fact that Mexico City is *much* closer to  me than New York City, which I’ve visited many many times, I’ve never been to Mexico, and yes, I do find this somewhat shameful. I would like to go. It just never seems to happen.)  My uncle had spent a year in Spain when I was a child, and I remember him stopping by our house on his way out. He held tiny kittens in his very large hands, and then he was off to the Far Away.  I didn’t know anyone else, even at 16, who had traveled so far without the military.

Those of you who have read The Goddesses of Kitchen Avenue might remember Trudy’s passion for Spain and the poet Federico Garcia Lorca.  That was my fantasy in motion.  Going to Sevilla, immersing in Spain, in Spanish, in the Far Away.  I honestly thought I’d set the yearning aside, replacing it with dreams of India and other locales.  I sent my son there a few years ago, and he brought me a rosary from Barcelona.  When he let it fall, bead by bead, into my waiting palm, he said, “You need to go to Spain.  It’s perfect for you.”

That rosary has been draped around a statue on my altar for these five years, but actually traveling to Spain has been nowhere on my radar.  I expected I would go at some point, but here it is. Now. I suppose I should bring the rosary with me, in my pocket, as I walk the Camino de Santiago–me and my sixteen year old self. I’ll carry my old Spanish teacher with me, too, and my uncle who was so brave to go and study abroad when he was only a teenager.  And my eyes will be wide open, and my heart, and I will see what I will see.

I am so surprised to be going!

Will you come along?

9 thoughts on “Anticipation…will you come along with me?”