One thing I had not expected was the depth of foodie culture that permeates the Australian landscape.  In Melbourne, there was the cafe culture, with its European feel, and the very cosmopolitan feel of the food and the sidewalk cafes.  All through the downtown area are these covered arcades, with graceful iron work and old-world glass and restaurants with tables spread along the alley, filled with the hip inhabitants of the city.   They all seemed to be wearing scarves looped around their throats, in a dozen kind of knots.

But the value of food was everywhere.  There are the usual dotting of chains–Hungry Jacks and McDonalds and Subway–but also a zillion cafes and stands selling every kind of food imaginable, from pastries to Thai noodles to fried fish.

Jo, being English, sampled the fish and chips widely.  Her first experience was with a fish called “flake” which underwhelmed her, and turned out to be shark.  It’s a very common fish for fish-n-chip suppers, but there were lots of others. Trevally and blue trevally (the latter received the Queen’s seal of approval (okay, so we nicknamed her the queen at a booksigning, where she was dressed beautiful beautifully and was surrounded by her fans and she spoke so eloquently and gracefully in that ever-so-British accent)).

I promised my mother I was going to sample strange fishes, and so I did: one of my very first evenings there, I sat with Kelly Hunter at a Harlequin celebration the night before the conference began, and asked her advice about the strange menu.  She said it was hard to ever go wrong with barramundi, as it is one of Australia’s premier fish, so I ordered that.  And it was fantastic.  Not just good, but very very good.  The texture is a hearty dense meat, not as thick as chicken, but much more substantial than flaky fish, and a great flavor.  I had it again in Sydney, at dinner with publishing folks from Harper Collins at The Pier, which had to be one of the best meals I’ve eaten anywhere. Ever.  Every morsel (and drop–the wine was spectacular) was excellent, but the highlight was a cone filled with a fish tartare–I thought it was swordfish, but I could be wrong about that.  It came as a sort of amuse-bouche before the first course, small cones of minced firm fish mixed with herbs and a dressing.  I was a little wary (tartare? doesn’t that mean raw?) but it was beautifully presented and one does wish to offer admiration in such circumstances, so I dutifully picked it up.

One bite demolished my doubts.  The cold fish, the herbs, the acid which might have been lemon juice, all together was staggeringly delicious.  I might have moaned aloud.

Other greats: definitely the roasted pumpkin and feta pizza at the vegetarian restaurant in St. Kilda.  Pumpkin isn’t usually served as a savory dish in America, and it’s as wonderful as any other roasted winter squash.  I ordered it in other dishes along the way, often mixed with feta, which is a favorite of mine.

Ginger beer, naturally brewed, served in little brown bottles like barrels.  Also, a hot ginger drink served by the hike master in Tasmania.  It’s a powder you mix with water and it would be wonderful for carrying on winter hikes.

Something I don’t like: Shiraz.  Still.  A man at the winery we visited implied that I’d been trying the wrong ones or eating it with the wrong foods, and when the Queen bought a bottle of wine for our last evening in Sydney, she asked the man to recommend something red, but not Shiraz since I didn’t like it.  The man said, “Get rid of her.”  But I’m going to go with my gut and just say no.  Never have found it to my taste.  Too sharp and bitter. I’d much rather a big hearty zin or a pinot noir or a simple rosso, and they’re all soft, deep, silky things.    If that ma 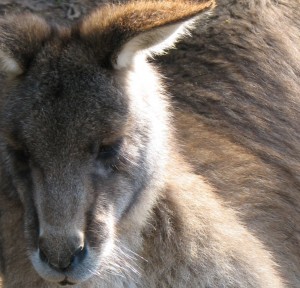 kes me an unsophisticated wine drinker, well, you know, I like beer a lot, too.

It was also hard to get enough vegetables, unless one wished to eat entirely rocket salads. Maybe that was a function of eating out or simply because it was winter.  I also think it might be difficult to be a vegetarian.  Most menus had one or two offerings, but not a lot.

There are a lot of choices of good lean meat, however, including kangaroo.   Simply because I had fallen in love with their cute, fluffy faces, there was no way I was eating Kanga, but it is an ecologically sound meat for Australians, since they are adapted to the environment and the herds must be periodically culled to keep the numbers from exploding.   Much like American deer, I would imagine.

Finally, the best meals this trip:

Sitting with a big group of RWA members, listening to them all tell stories, the very last night.  We were all punchy after so much intense discussion and learning, and I can’t remember the food (which was indifferent), but the company was fantastic.  If you go, be sure to polish up some stories and tell them very well.  These are great raconteurs, every single one of them.

Eating chocolate covered teddy grahams and gummy snakes with Renee while hiking in the Dandenongs.

The drinks and chocolates at Lark’s Distillery in Hobart one Saturday night.   A celtic band came in and we played cards after negotiating Internation Rules of Rummy.  The Queen won, natch.   That’s what queens do.

Our long, relaxed, exquisite meal at the Pier in Sydney. Great company, great food, such smart minds and publishing discussions.  It’s hard to beat the company of publishing folks.

And my time is up!

One thought on “Foodie Australia”