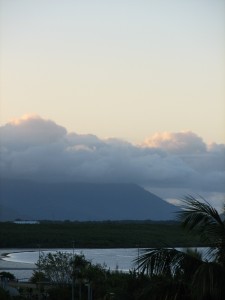 Internet access–and time–became severely limited the final week of our long, insanely wonderful Aussie tour.   Since last Sunday, I have been on six flights, covering thousands of kilometers, visited the Outback, Cairns and the Great Barrier Reef, and Sydney, and now I’m typing this from my own laptop while I await Flickr to upload the photos I’ve spent the day organizing and labeling.   It is the perfect task for a jet-lagged brain, and I’ve found that I will never get it done if I don’t do it right away.

I have many thoughts to organize into categories for you. Australia turned out to be so much more than I expected, and so astonishing, and so nourishing.  I feel like the girls in the basement have been on a wild shopping binge–each one rushing out every day to gather up all the things she most likes from the environment we found ourselves in, grabbing colors or culture or accents or food or characters according to her job.  Every night, they all dumped their stuff in the Room of Creativity, collapsed overnight, the rushed out again at daybreak.   All those bags and boxes and observations are piled up in a messy tangle in the middle of the floor and it’s going to take a little time to get them all sorted.

A couple of things I don’t want to forget, raw material from the past few days:

The Great Barrier reef knocked my eyes out of my head.  Especially from the air.  You think you know about something, and then you see it for real, from an angle you never expected, and entire universes open up.

I learned so much 18th century history!  Again, things you sort of think you know, and there is so much more to them.

I had a very intense reaction to the Outback.  I think I expected to like it, and instead, it kind of freaked me out.  More on that as I sort it out.

In regard to those questions I posed at the beginning of the trip: many intriguing conclusions.  The first one is:  Australia is not America or Britain or Scotland or New Zealand or any other place.  It is its own separate self, very unlike anywhere I’ve been.   There is, undeniably, a strong British influence (though the food is better), but lots of other things, too.   More on that, too, as I sort it out.

THE LOST RECIPE FOR HAPPINESS will be out in an Australian edition in February, so I hope you Australians will look for it on your shores.  I had dinner with my publisher and sales force on Friday night, and I’m excited to let you know that I’ll post cover art as soon as I have it.  I also came home to the news that Lost Recipe has now sold to Denmark.  Yay!  May there be many more.  I love the books to go around the world.

Enough for tonight.   Check back as I sort out the stuff the Girls brought back from Australia.  (Oh, I am both happy and sad to be back home!)

8 thoughts on “Australian photo tour now up on Flickr”