Or, there really is magic in the world if you just let yourself see it… 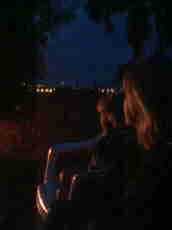 J. is my niece. She’s three and a half, with yards of spun sugar hair and big blue eyes. She loves princesses. Her room is decorated with them: Snow White and Cinderella and Belle–wallpaper and bedspread, books and pictures and games. She has a Snow White dress to play in.

She is really a girl, if you know what I mean. If I want to delight her, I bring her something like shoes covered with red glitter, or long tangles of beaded necklaces, or lipstick. She’s also wary and self-contained, not at all given to rash alliances or fierce crushes. She loves her mother, thank you, and grandmothers, and her father. The rest of the world, well….whatever. We call her Queen J. because she is so imperious.

Which is what made the matter of Maddie so initially bewildering.

Maddie is my younger son’s girlfriend. She’s a beautiful, sweet looking girl with big blue eyes and blonde hair. J. had never met her until a birthday celebration in my house a couple of months ago, but there was no question that J was smitten from the very instant Maddie walked through the door.

J’s eyes grew wide, and she blinked. One could almost hear that musical chime in the background. As if she were in a cartoon, she drifted over to the big girl and said, “You’re a princess, aren’t you?”

J did not leave Maddie’s side the whole day. And it was that rare, focused smittenness that’s unearnable: J sat beside Maddie and gazed up at her. She said, matter of factly, “My mother, that’s her over there, used to be beautiful, but she isn’t any more. Not like you.” (Mother, blessed with a good sense of humor, chuckled.) Combing her fingers through her own hair, J added, “We have yellow hair, don’t we?”

When anyone walked by, J informed them that “the Princess and I are watching TV.” When Maddie and the other teens had to leave, J cried, and Maddie and Miles promised to come see her very soon.

Which they have done. On the 4th of July, I wandered over to my brother’s house to watch the hundreds of thousands of illegal fireworks shooting across the city–he has a lovely view. J was lighting sparklers when Miles and Maddie surprised us. I’d heard that J still adored Maddie, but it was almost painful to watch.

J. leapt up and said, “Hey! You’ve never been to my house before! Come sit with me. Right here.” She sandwiched Maddie’s hand between her own and gazed up at her face with the steady, clear light of absolute adoration. “Everything is okay, Princess. I have you.”

My brother said to Maddie, “How does it feel to be royalty?”

And Maddie, with her quiet voice said, “I like it.”

J. reached up and brushed a palm over Maddie’s hair. “It’s okay if I touch your hair. It’s so pretty.” And, “Let me get your pop for you. Here it is.”

It struck me, watching them, with purple and red and yellow sparklers of light exploding in the air behind them, that magic exists. A little girl met a princess, and the princess came to her house, and kissed her, and hugged her. All in the world was very beautiful, because the Princess loved her.

There are times I really wouldn’t mind being three again. Since that part is impossible, I think I’ll spend the day looking around for magic I might have missed.

It was something very simple, after all that alerted J to the fact of Maddie’s royalty: she wore a headband of white rhinestones to the birthday party.

A girl just needs to know how to look at things.