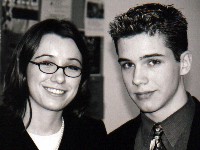 Ordinarily, I don’t brag here, but if my son had been drafted by the NFL, you’d want me to say so…

My son Ian is madly in love with debate. Happily, he fell in love with a girl who is also in love with it, and they are a parlimentary debate team for their college, Truman State University.

This year: they are THE NATIONAL PARLIMENTARY DEBATE CHAMPIONS, with an astonishing record.

Truman State University’s debate team recaptured the national debate championship April 11, at the National Parliamentary Debate Association National Championship Tournament at California State University-Northridge. The team of Marie Tenny, junior psychology major from Villa Ridge, Mo., and Ian Samuel, junior computer science major from Pueblo, Colo., established a new record losing only one ballot in the entire tournament and capturing the first national championship for the Truman team since it first took the national title in March 2000. Their win placed them at the head of an unprecedented field of 302 debate teams from 102 colleges and universities and several international teams (including representatives from China, Belarus, Moldova, Latvia and Lithuania). The Truman team passed prestigious institutions such as the University of California-Berkeley, the Air Force and Naval Academies, the University of Notre Dame and the University of Missouri-Columbia. The tournament was the largest collegiate debate tournament ever held.

Tenny is only the fourth woman to ever place so high, and she is the first since 1998.