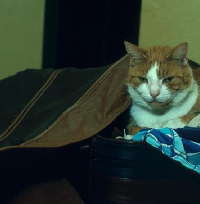 And why yes–that’s exactly the look Esmerelda has on her face!)

I’m leaving for Scotland tomorrow. I’ve had smallish trips the past year or so, but nothing big since I hiked in France a year and a half ago. Today, I noticed the odd mood was on me, making me unfit for anything else. It’s a jumble of emotions.

Anticipation–what will I see? What will move me? Who will intrigue me? What stories will I hear? Nervous fretting–where am I going to find good coffee? Will I embarrass myself by not understanding some cultural thing? What should I wear on the plane and will there be a good movie to watch and will I sleep?

I admit to a certain amount of concern (small amount)over the fact that I am traveling during unsettled times–we’re at war, and perhaps there is danger I don’t know about. I am so obviously American when I go abroad–in gestures and accent–that I worry I will not be liked. Our war is not especially popular elsewhere. And speaking of language–is Scotland English going to be more like Irish English, which I had no trouble deciphering, or will there be strange little lilts and phrasings that make me blink in complete bewilderment (as I did often in London) and say, “Pardon me?” I understood the French in rural France better than I understood the English in some shops in London!

My bags are open on my bed–one medium-sized rolling suitcase and a carry-on, both ready for me to slip in the last bits of things tomorrow. It feels I am forgetting something–it always does–but I go through the lists in my head, double check to be sure the little things, like my favorite shampoo and the spray-on moisturizer I love, are there. And the big ones–do I have enough warm socks and sweaters for the rainy cold promised in the forecast? (I forgot to buy an umbrella and dreamed of armies of them marching around.) Shoes are always a problem. I need my hiking boots, which are very large, but I don’t want to wear them on a nine-hour plane ride.

Boots in the suitcase, then, clogs on my feet? But if the airline loses my bags, I will be upset over the boots, not the clogs. Boots, then. I’ll unlace and shed them as we fly.

Then the really important things–passport, ticket (electronic, so no problem), cool guidebook I’ve marked up with possibilities. Money, or rather traveler’s checks–in British pounds from AAA, which I never thought of doing before. A great way to save a little money at the exchange booths; the checks are already in the currency I’m using. Cool.

I’m set. Ready to go. Nothing is left but to think…what will I learn? What little or big something is waiting for me on the other side of that vast body of water?

And because I will come back and tell you what I did discover, it seems only fair to tell you want I’m thinking now. How does the anticipation differ from the reality of travel?

What I wonder tonight is what I am expecting. It’s not like Scotland has ever been one of my must-visit places, though I know it is for many people. It was a place I thought to check out one of these days, but circumstances conspired to give me the chance to explore it with a friend who is a native. I know him as an ex-patriot, someone who is Scottish, but also enculturated to America in very definite ways. I’m curious, tonight, to see how he will be different in his home culture.

I know about the mists and the mountains, because I’ve read of them. I love the sea, but not the warm and welcoming sea so many admire–I love the ocean when it’s tossed and unruly and gray. I love it when there is a hard wind blowing and nobody else wants to be out and I’m alone, admiring it. I love inhospitible rocky shores and little creatures in the sand, and look forward to feeling that saltiness on my skin after so many months of unrelieved sunshine and placidity in Colorado.

I look forward to castle ruins on a hillside, because the idea of something so old just lying on a hill is a novelty to someone raised in a place where the most ancient structure is 140 years old. It’s magic to put my hands on rocks placed into a structure five or six or times older than that.

I want to see where William Wallace (made famous by Mel Gibson in Braveheart) wandered, was born, was arrested. Where Burns wrote.

But mostly, this time, I am traveling to see. See whatever shows itself. Whatever people show me. Whatever sights I am to see. I am putting myself at the service of the act of setting out. I suspect, in this land, that the people will be my favorite part, that I will love the sea and the castle ruins and the mists and the mountains, but most of all, I will love the folk who populate those landscapes.

We shall see. I promise trip reports upon my return. You can measure with me what I hoped to see in constast with what the land had to say. I’ll listen as well as I can and report back.

See you in a couple of weeks!