Wherein our heroine discovers there is magic in sacred places

All writers can point to a handful of heroes who shaped them-usually writers discovered when the tender, hesitant novelist was forming. Often the young writer has a peculiar and almost slavish devotion to a book or set of books. I can point to three: Ray Bradbury’s DANDELION WINE; Shakespeare’s ROMEO AND JULIET, and Anya Seton’s GREEN DARKNESS.

But of them all, I have to say GREEN DARKNESS had the single heaviest influence. I read it the year I was fifteen. And read it, and read it and read it, and read it. I keep two copies of it-one to hold, one to lend-and pick up copies whenever I find them in used bookstores, since a whole generation of writers were influenced by this book. And when I knew we were going to travel to England, one spot on my “must see list” was Ightham Mote, the house in Kent that inspired Anya Seton to write GREEN DARKNESS.

It was our last day in London. We had one more, when we came back from Ireland, but we didn’t know how we’d feel, and there was a sense of sadness for all of us that morning. We’d missed so many things we’d hoped to see–and for that reason, the night before, I’d considered doing something besides what I had on the schedule, which was to journey down to Ightham Mote. Maybe taking in the British Museum or something enlightening like that. My mother, wise woman that she is, suggested I’d feel very sad if we didn’t go to Ightham Mote. Still ambivalent, I agreed.

We awakened to find a very dreary day–the sort of weather I adore, but tends to make travel a little less pleasant. In spite of dire warnings about the wet English spring, we did not have much gloomy weather, but this morning, the skies were gray, and there was actual rain falling. Everyone was a little tired, and the food the day before had been singularly unsatisfying for my boys, so they were edgy and hungry, too. After so many days of absorbing historical sites, my imagination felt overstuffed, like there was no more room left in it.

So, as I stood outside that morning, drinking my cup of coffee and peering at the gray sky and smoking–outside, like a good American (which made me look very weird in most places there)–I wondered again if it was a good idea. We would have to take the train, and I couldn’t really tell how far it was, and my youngest son had left his Gameboy on the train to Bath … and once we got to the town of Sevenoaks, there did not appear to be any public transportation to Item Mote.

But again my mother insisted I would be very disappointed later if I let this opportunity slide by. We walked down the hill to find ourselves a hearty breakfast, which improved my grumpy boys’ spirits immensely, and headed out on the train. It turned out there was no public transportation to the house, but there were taxis–and I learned that my mother had never taken a taxi in her life! It was a beauty for a first ride–big and black and humped, like something out of a film. As we made our way through the narrow lanes that led to Ightham Mote, I tried to image that once, Anya Seton must have traveled this very road, on her way to discovery, but I couldn’t seem to make it real.

In the parking lot, all was still and quiet. As we looked around, there was nothing to mar the feeling that we’d suddenly stepped back in time. The house was hidden, presumably in a hollow hidden by the thick trees growing all over. We could glimpse rolling green hills, and heard birds singing madly.

We paid to get into the grounds, and walked down the long path to the house, still unable to see it. I felt buoyed and pleased, but was prepared to be disappointed by the actual house itself. How could it possibly live up to my imaginings? All those years of young girl fantasies? All those hopeful wishes and romantic dreams and wild speculations every teenager is prone to indulge, and even more a teenage girl of such a bent of mind that she will grow up and write romances?

The path led downhill, through a gilded, forested world that hid the house itself, though we could glimpse a wide, open grassy spot through the trees (a bowling green! Who knew how pretty they could be?). My boys leapt ahead, and my mother seemed to sense my need to do this by myself, because she suddenly dropped back, and I was alone as I came around the last curve.

By this time, I’d seen a lot of medieval buildings. Ruins and churches and gardens and all sorts of things, even the Tower of London and the crumbling city wall.

But there stood Ightham Mote, under a sky half-mottled with grayclouds, the plants and trees glistening with recent rain–and my eyes fell first an a bridge, just a small, gray stone bridge, arching over a moat.

With water in it. 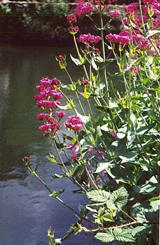 Light fell on the water in gold coins. Some vibrantly pink flower grew on the walls of the moat itself, and cast rosy shadows into the gold. The water moved on its appointed rounds, as it had for centuries. Above it rose the house in half-timbered splendor. Unimaginably old, with mullioned glass windows reflecting the light. And although I didn’t think of her in words, I thought of the tightlipped villainess of GREEN DARKNESS, thought of her looking out to this splendor and being unable to encompass it.

I moved into the yard, and looked very slowly at everything—at the green stretching out from the house; at the tumbling-down manor behind it, with a roof in sad need of repair; at the neat gardens behind the hedges. I noticed the tourists were not the usual ones I’d seen–these were largely older, largely English, and for some reason, that made it seem a secret discovery.

We toured the house and the chapel,stood in the courtyard and marveled. My boys played in the gardens. I shot a thousand pictures (or at least 36); I entered the Great Hall and saw a copy of GREEN DARKNESS propped up on a table in a closet, but didn’t realize why it was there until I toured the whole house and came back out again (it was in that place turned into a closet that they found the skeleton of the girl who inspired the book).

I had expected to feel Presences. Oddly, what I felt instead was steadiness. The courtyards and chapel and crypt were quite deliciously medieval, and there were Georgian era rooms, and rooms made over in the Victorian period, and even one that was quite modem. I expected to mind; I did not. Here was a house that had been loved and lived in for centuries.Centuries. Generation upon generation upon generation lived their stories there. And still it stands, mute and warm, giving shelter.

Afterward, we wandered in search of food, and found it at an open air spot–in this case, a real tea, since we were starving and they had good food. We competed with birds and squirrels for our meal, and I discovered the name of the wonderful pickle I’d been getting everywhere: Branson’s Pickle (I brought some home with me). Then it was time to go back, and I had to climb back down the hill to the gift shop to call a cab (“A cab?” the woman echoed, bewildered. Another woman explained: “A taxi.”) to come get us.

On the way back up, I stopped at the little protective building that houses the source of the moat. It’s open on one side for offerings, and I paused, totally alone. From my pocket I dug out the biggest coins I had-a pound coin and a two pence, and for one long moment, I held them in my hand, thinking of the first time I read GREEN DARKNESS, and how much I’d loved it. I remembered how my brother, when I finally found a used copy again, was startled to see the cover and told me he remembered it being in my hand all the time that year. I thought of Anya Seton herself standing on that exact same place, with the light breaking gold over the leaves, and the silence of the land, and the puzzle of story pushing through her writerly imagination. I thought of how deeply influential her story had been on me, how it had turned me into a writer.

I thought of how the miracle of writing my own stories brought me to stand in that very spot, with a pound coin I’d bought with dollars readers had given me, and I somehow felt that Anya Seton knew, that somewhere she was laughing at the quirkiness of creative joy. I tossed the coins, whispering a powerful thank you, to her, to the heavens, to the builders of the house–and in that moment, between the coins leaving my hand and the moment they hit the shadowed waters, I realized there might be some other writer standing there someday, having read of my own pilgrimage, some writer who dreamed her own dreams because of something I wrote that inspired her—

And I swear to you, I heard a chortle. It was the chortle of joy that is the eternal creative spirit that lives in all of us, however great or small. In that moment, I realized that it didn’t matter what I wrote or how I was published, only that I was true to the calling as it came to me.

My coins hit the water, water that flowed from there to the moat, and out again to the river, water that has flowed for centuries, and will likely flow for centuries more. I turned and walked up the hill in the gilded shadows, and I was Anya, and Celia the wanton and fair, and myself, inexpressibly, eternally enriched.