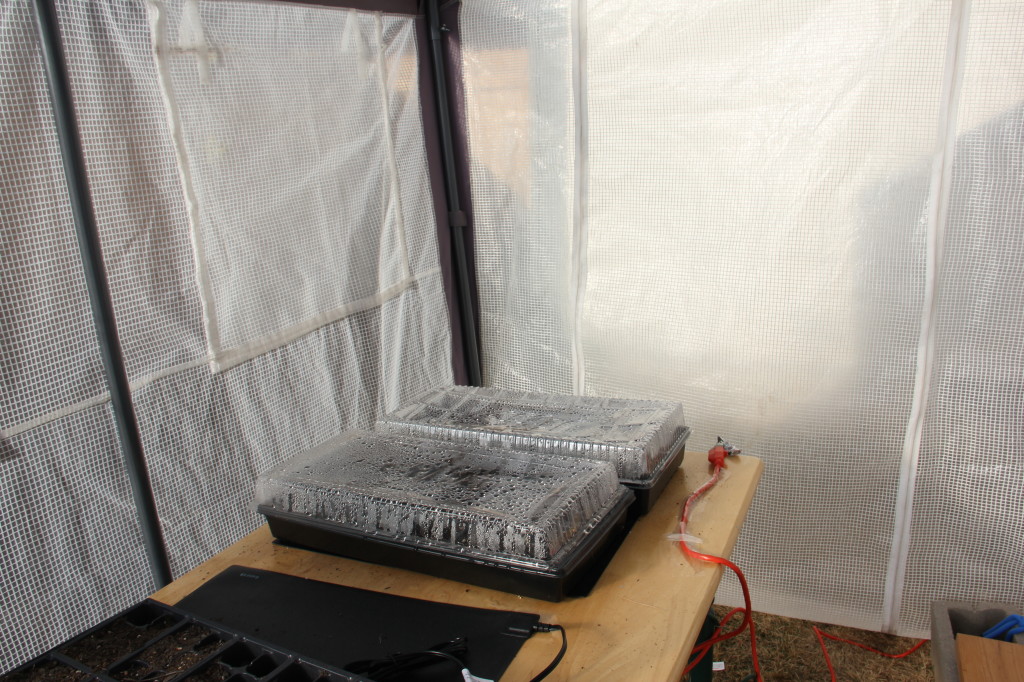 Finally, there is real spring in the air. You can feel it burning off the cold by eight-thirty, and a brilliance of light makes everything stretch and awaken.  My poppies are up, green and thick, and the daffodils—a bit scrawny so far—and the tulips, looking sturdy.  I’m surprised by a crop of garlic that must be leftover from last year, and not at all sure that the wisteria that’s supposed to overwinter is actually going to do anything.

In the meantime, I have a new experiment.  I’m madly in love with a chubby Spanish pepper called pimento de padron.  I must have had them in Spain when we walked the Camino, but it was later that I started to love them so madly—they’re often served as a tapas plate in Spanish restaurants, and prepared very simply, pan grilled in olive oil, sprinkled with coarse salt.

That’s it, but every bite is heaven. They are mostly not very hot, but part of the pleasure is in finding the one in ten that has a bite—it explodes in your mouth, spice and heat and salt and oil, and it makes me laugh, every time.

The thing is, we have peppers of every variety you can imagine here.  I could buy habaneros and jalapenos and Anaheims (which we call Pueblo chiles here) and cayennes; I can grow all of those and more from bedding plants sold at the grocery store.

Padrons are not common. I had to search hard to find a place that would ship me some last fall, and they were $17 a pound, plus shipping.  Worth it, but at that price, not something I’d do very often.

Naturally I decided to see if I could grow some.  Logical,  yes?

Problem #1: getting the seeds. I did find some, and ordered from three sources, to see which ones grow best.

Problem #2: peppers need a long growing season, which I do not have.  They also need a very hot bed to germinate, and my greenhouse is not heated.

This was not the easiest challenge.  I bought some heated mats, but they said they kept the temperatures of the soil about 10-15 degrees higher than the room. Not really enough.  I fretted and considered one solution after another.  I bought a space heater, but when it arrived I realized that even if I hung it from the rafters of the greenhouse (not ideal), I’d worry about it melting the walls.  I put it aside for my real greenhouse (which I vow to you I will have by this summer’s end) and went back to brainstorming and combing the web.

Turns out, many people use jugs of water, painted black, but I didn’t have time for that. Another solution is oil heaters, which I happened to have in the basement. I lugged it outside, but it was too tall for the spot it needed to go, and the slope was too much for it to stay stable—another bust.

I finally decided that maybe I was putting too much effort into what is, after all, an experiment with seeds, a little hobby play.  Keep things in perspective, I said. Let’s just see what happens.

I planted the seeds, along with some celery.  One of the leaflets in the padron seeds suggested putting a ¼ inch of water in the bottom of the trays to

help conduct heat, so I did. I also made a special trip to Lowe’s to find seedling greenhouse covers, to help keep the heat and water in.  I tucked some potato starts in a black potato bag and put it on the south end, by the tables, hoping it would hold and conduct heat, too.

Then I closed everything up and waited for the storm. (Oh, I didn’t mention that? Yes, a storm came through over the weekend and dropped the temperatures to below freezing.)  The cats slithered in below the plastic and slept in there, so I figured it had to be sort of warm.

By the time the storm passed, I’d stealed myself to find everything inside frozen—but when I opened the window flap to peek in, a rush of warm—not hot, but definitely warm—air poofed out.  Everything was fine!

Nothing is sprouting yet, but I’ll keep you posted.

5 thoughts on “An Early Spring Challenge”