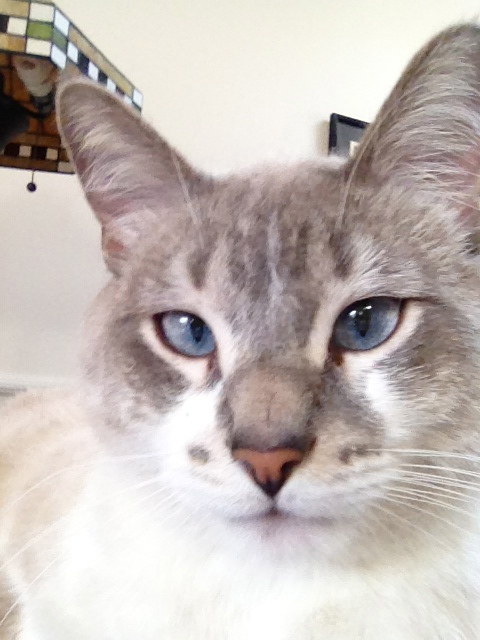 On Saturday night, Neko somehow escaped into the backyard when Jack when outside. We didn’t notice he was gone until Sunday morning, when he didn’t show up for breakfast (and believe me, breakfast is his favorite thing). I felt sick to my stomach when I realized he was gone. We went out to look for him, calling and calling, but nothing.

Not on Sunday, or Monday. Monday morning, I made a couple dozen posters with his picture and walked around taping them to the central mailboxes all over the neighborhood, along with taping them to the park signs (there are two parks–gotta love the suburbs). I tried to figure out line of sight for a cat–over fences, down sidewalks, and posted in those places.

CR went to the Humane Society. I signed up for a pet alert service.

I was not, this time, particularly worried about foxes. He’s a big cat, and fierce, and fast, and young. I WAS really, really, really fretting about the cold. It’s been below twenty most nights. He’s a very coddled cat.

I also worried that somebody would just like him so much they wouldn’t return him. He’s so adorable, and really pretty, and a total charmer.

Wednesday, nothing. (Remember, if you will, that I am an emotional wreck because I’m finishing a book anyway…adding this to the mix gave me a shoulder so frozen I couldn’t move it yesterday)

But here’s the thing: I kept sending out prayers for safety and protection. I did what I did with my children when they were driving with friends: imagined giant angels with big powerful wings all round them.

This morning, I woke up determined to polish the last couple of chapters, check a few more facts, and get my book done, no matter what was happening with Neko.

Just as I sat down at the computer, my phone rang, and a woman said, “I just came back from my walk, and I think I know something about your cat Neko.” She said that there had been a boy walking around the neighborhood, going door to door on a particular street, trying to find who owned this pretty cat. He had the cat in a carrier. The woman said, “He was the sweetest boy.”

She told me the street name, and I looked it up–and it is a straight arrow across fences, back yards, and the park. I was in my boots and coat in five minutes flat, armed with new posters. It was too late for the off to work crowd, so I pinned up posters and put them in every door on the street. I saw one guy and asked if he knew the kid–he said, “Oh, he was so great! He said he lived over there, across the street.”

So I dutifully went there and saw an older couple, leaving their home. I waved at them and they waved back, but I waved more urgently to get them to stop, and they did. I poured out my dilemma. “Did you see him, this boy?” Yes, they had. The old man said, he had big earrings in his ears, a teenager, real skinny. Hispanic, maybe.

Did they know where he lived? They weren’t sure. The woman told the boy to take the cat to the Humane Society. She said she’d managed to get her dog back that way.

I thanked them, and continued flyering every door. I thought I would come back at dinner time, and knock on each door. Somebody would know this kind teenage boy.

It was time to finish my book. I went home. I kept thinking that I would do this all by myself, and then surprise CR, who loves this cat like crazy, but I worried about the Humane Society angle, so I called him and left a message. “Give me a call.”

And it was! The mother of the teen had called the Humane Society and they gave her CR’s number and she called. They chatted.

He head butts, CR said. Yes, said the mother. He had to stay in the garage because her cat is territorial, but he was safe and warm and fed.

I had to wait until 4 for them to be home. I finished the edits and mailed the manuscript and took Jack for a long walk, taking down all the posters I taped up around the neighborhood.

CR came by to pick me up. We drove around the corner to the house, and four kids answered the door. Skinny, yes, and all of them had earrings, and they were kind and sweet and earnest, and they so loved our Neko! They said he was the best cat ever and they liked how he licked their noses, and Neko climbed up on my shoulder and I kissed him and kissed him and tried not to cry. I gave them money, which they tried to give back, but then I asked when he showed up.

They said, “Saturday night! He was just meowing and meowing on our doorstep!”

So he got locked out, probably had some fun exploring the local backyards, got cold, realized he had no idea where he was, and went to a door and meowed, and someone let him in, and they fed him and coddled him and all is well.

Mainly, I am wildly, wildly grateful that my cat is safe. That I can kiss him. That tomorrow, I’ll have to keep him from eating everybody else’s canned food. That he’s sleeping on my bed.

It seems against all odds, and yet, here he is. Goodness and mercy do exist in the world.

4 thoughts on “The Story of Neko, involving good luck, good Samaritans, and a good helping of cat charm”