Another photo & essay about the Waldo Canyon Fire

(Read the first one, about the explosion of the firestorm) 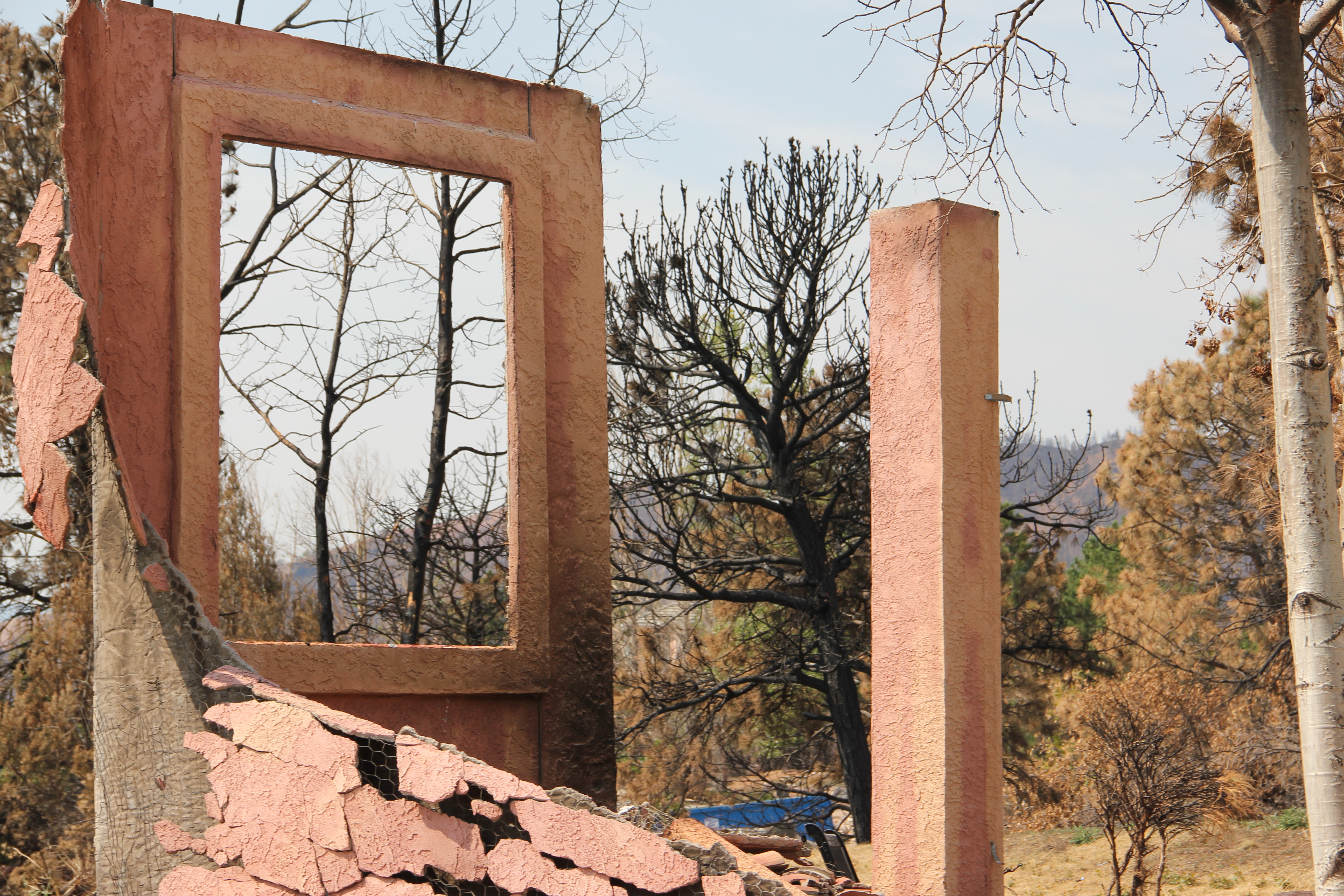 My friend Brenda lives in the middle of the Mountain Shadows burn area. Her home survived, but her daughter’s burned to the ground just one block south. We were chatting Sunday about the daughter’s children drawing farewell notes to their stuffed animals on the driveway before it was razed (and weeping).

I asked if she was going to stay, if it would ever feel like home again. She said, “Have you seen it yet?” I said I had not, but I hoped to get there before all the damage was erased by new construction.  There is a book brewing, of course. That’s what writers do with intense experiences–transform them into stories and narratives.

She said, “You must come.”  (This is the same angel who took me to the soup kitchen where she volunteers when I was writing Garden of Happy Endings.)

Today I joined her for a long, long walk around the burned neighborhood. I was braced for feelings of sorrow, but that wasn’t what I discovered. It is dismaying, of course, to see the damage–the blackened trees and burned out cars and houses that have not, even after seven weeks, been touched.  I wonder about the families who haven’t even sifted through the debris–where are they? Is it too difficult? Are they despairing or furious or what?

But there was a lot more that was hopeful, even exuberant.  Like seemingly dead trees coming back to life. (To see any photo better, click on it and you’ll see it full-sized.) 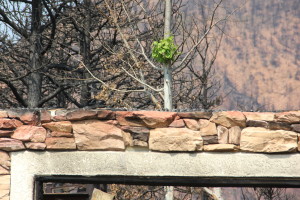 And cactuses doing double duty.  Look at them, reproducing out of the burned cactus! 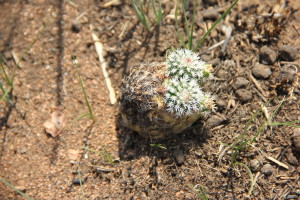 One of the most touching things I saw was a garden.  This is in the very worst spot, where 140 houses burned in a cataclysm that is still hard to understand.  Brenda told me about it before we came, and I was eager to see it, because that was the thing that ran through my mind so much during the fires: I could lose a lot, but it would be agonizing to loose the garden I’ve been working so hard to create. The neighborhood where this happened is filled with beautiful gardens, and I thought of all my brother and sister gardeners so often.

This is what we saw: 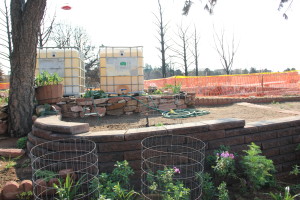 Please notice a couple of things.  There is not house standing.  The orange fence surrounds the foundation of the house.  Notice the denuded tress.  Not a leaf, not a living branch.

Also notice the bird feeder.  The fact that the garden is green, and tidy, even though there are no utilities to this site.  Those big plastic tanks are filled with water.  And this is what remains: 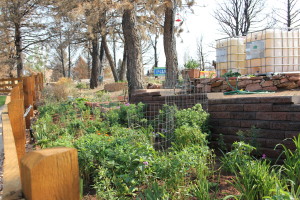 How did the garden survive?  How is it that there are dead trees all around and yet her garden, much more layered and elaborate than this photo shows, is thriving?  She came back and made it a priority. She focused on what she could do.  I admire that, and wanted so badly to speak with her. Brenda said she’s often there, working four or five hours a day, as she did before the fire, but she wasn’t around today.  Another time.

Another thing that surprised me were the little beauties, here and there. Volunteers have come through and sifted through the debris of many of the houses, leaving stacks of artifacts for the home owners. 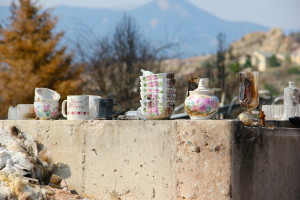 There was more, so much more.  We walked for three hours, and I shot over three hundred photos, collecting images before they disappear. A chimney sticking up so tall you begin to understand how big the house was, a fridge standing alone in the midst of a debris field, its contents unrecognizable (as sometimes happens in my own).

We chatted with an elderly couple whose house looked untouched from the front, but had been badly damaged in the rear, and they were aggrieved to report they had also been rear-ended two days ago. The variation in what has been done and what has not is vast–some lots are scraped clean, and are ready for new building.  Others are untouched, even by the cleaning crews, the bricks still laying in a pattern that suggests explosion.  The area was oddly empty, patrolled by police, crawling mainly with construction and clean-up crews.  We walked up one hill and down another, and then another.  It is not at all barren or lost. By next spring, the hills will be covered with greenery, if not new trees.  There will be fresh homes built.

In one place, I captured my favorite image of the day.  Roses growing in the debris of of a front yard. 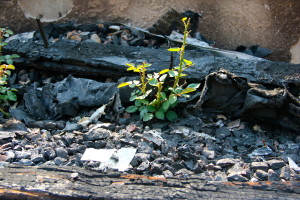 And last, but not least, this is something you see all over the city, in one form and another.  The firefighters themselves were surprised by the outpouring of love they experienced here, and it’s worth noting.  I think of them a lot, trying to stand their ground, save a house, try to outsmart the beast of fire, the weather, the patterns.  I think of them losing that ridge, and losing a house, and sleeping in tents in a school yard down the block from my church.  I say this, too: 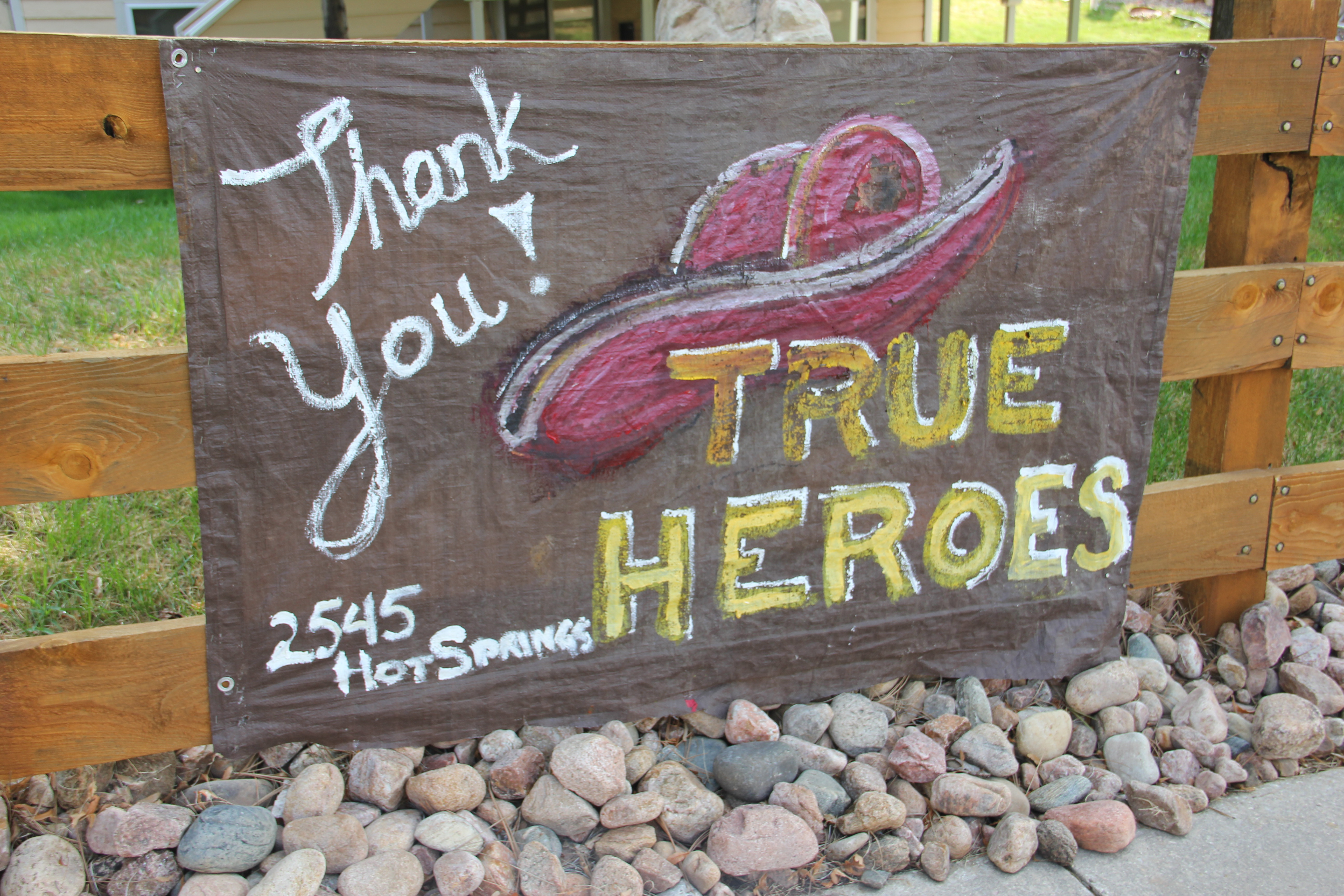 It’s over, in a way, but in a way in never will be.  We’ll remember it, always, the dragon firestorm that wanted to gulp the city whole.