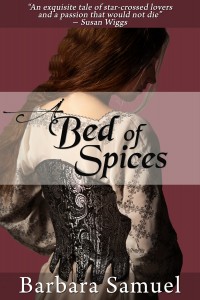 A BED OF SPICES is a wildly romantic tale of forbidden love set in the turbulent middle ages. Solomon and Rica meet by chance at the herbalist’s cottage and fall deeply in love despite the divisions of religion, class, and expectations — but how can they possibly find a happy ending with so many things stacked against them? Dark, beautiful and ultimately uplifting, this is a romance you won’t easily forget.

READ AN EXCERPT FOR FREE

THE STORY BEHIND THE STORY

This was my first historical novel.  It came about when I discovered two things: that St Valentines day was celebrated in the middle ages, and also, that European Jews were persecuted during the plague.  Which might make you think this is much too grim for your reading pleasure, and I’ll admit it is a dark book, but it is also a romance.  It is focused on the love story between these two young, passionate, and conflicted human beings feel for each other, and what that might cost them.

Because of the unusual setting and storyline (which was quite quite different at the time), the book did not sell a huge number of copies, but as time goes by, it continues to attract devotion from some readers. This combination has led to a shortage of copies in circulation, and new editions are quite pricey.  One of my favorite comments over on GoodReads said that she tended to be cheap, but paid $15 for her copy and found it worth every penny.  Thank you, my dear.

One of my favorite reviews is here:  http://www.likesbooks.com/cgi-bin/bookReview.pl?BookReviewId=1389. , where it was awarded Desert Island Keeper status by Vivien Fritsche.

Here is the original cover, which I never liked and ended up on somebody else’s historical romance at some later date. How do you like the one my cousin

Sharon and I came up with (above)?  Does it appeal to you?

If you’d like to look for it in a print edition, you can try some of these sellers:

Amazon new and used copies of A Bed of Spices.  Recommend you skip the $2000 edition.

Barnes and Noble approved sellers of new and used copies of A Bed of Spices.