I posed some expectations and questions about Australia before I left.  Now that roar of travel has settled 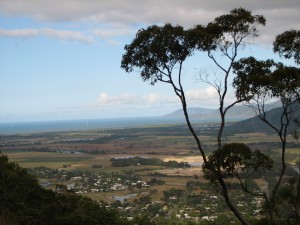 back into normal life, I can take a look from this side.  How were my expectations met or not, shifted or not?  With travel, there are the things you think you know, and the things you don’t even know you don’t know.

In the realm of total surprises: The Reef

In the latter category was swimming in the ocean.  We took a ferry out to Green Island and walked down the white sand beach to the beach, I was stunned by how clear the water was.  My experience with oceans is mainly California, where the water is muddy and often thick with seaweed, and you certainly have no idea what that…thing…might be brushing against your leg.  It is also cold.  Freezing cold.  I don’t go into the ocean in any significant way.   I like to sit on the beach.  I like to watch the waves and the birds and all that.  But swim in it?  Not in this lifetime.

But this water was clear! As clear as a swimming pool. Jo dived right in, and said, “Come on in. It’s nice.”  So, warily, I crept in.  And it wasn’t exactly hot water, but it was bearable.  I love to swim and it really was possible to see the entire floor of sand beneath my feet, so I gave it a shot–and ACK!  I COULD FLOAT!  Like do nothing, and FLOAT in that salty, salty, beautiful water.  I spied something out of the corner of my eye and whirled (freaked!) to see two little tropical fish, silvery things with blue stripes, swimming nonchalantly right along with me.   It was like being in an aquarium.  We only had an hour, but I’m telling you, I so get it now, why everyone likes tropical waters.  (Though not at Cairns for six months of the year, where there is a deadly, deadly jelly fish that fills the place.  Box jellyfish.)   CR said he’d go if we went to the Great Barrier Reef, and we can snorkle or even, if we’re feeling brave, scuba dive.  I’m so there.

Because here’s the other thing: The Great Barrier Reef is indescribable.  Incredible. We took a semisubmersible trip down and were blown away by all the life, teeming and teeming in that clear water, all the things you see so clearly.

And then, quite by accident, I saw it from the air as we flew down the coast.  I never thought to ask if I could have a seat on that side of the plane.  I didn’t know enough to realize it would be so magnificent.  I happened to look out just as we started flying, and there was the reef, plainly visible in all the swirling turquoise and aqua and sandy patterns it makes, hundreds of miles of reef and teeming, teaming life.  I could see the shape of islands emerging, and the patterns of the water, a vast, jeweled science experiment, and I was knocked right out of my head, dazzled and humbled, my brain set afire.

Things you think you know

I didn’t expect Melbourne to be so cosmopolitan in spirit.  I thought it would be sort like an Australian version of Chicago or Denver, slightly not as hip as the big glitzy neighbor.   Not so.  It has a continental, elegant feeling, a vibe all of its own.  In the way the men wear such formal suits and the women in their business attire, it felt like London, and maybe that sensibility is carried through to the feeling in some of the bookstores and food shops and takeaways.  I did find (to my great joy) that British tea is everywhere, but so is very, very good coffee.

It was hard to get much of a look at Sydney, of course, since the rain was pouring down like it was.  My my editor was stunningly hip in red boots and cropped blonde hair and a coat I’d probably recognize if I were more fashionable.

Expectations
Things I am pretty sure of:
–that I will like the Australian sensibility. I am expecting it to be somewhere between the US and Britain, with a hefty helping of its ownself, which remains to be discovered.

Someone in the comment asked why I would expect that inbetween place. It wasn’t that I expected Australia to be a stepchild of either the US or Britain, but since I’ve traveled to Britain several times (and I’m living with a Englishman after all), and I am a native of the US, I was wondering where Australia would be on the continuum.   New Zealand felt quite British to me, in so many ways, even the houses and the bakeries and certain sensibilities of entertaining.  Not much like the US, or at least Colorado.

Which is a long winded way of saying we all catalog experiences and ideas according to what we already know.  It’s the way the brain works.

Given that, I found Australia to be entirely itself.  Yes, there was that slight Britishness here and there, in the tea and the suits and the take-aways, and in the bookstore, in particular, I saw similarities.  But I didn’t think it felt at all American, though of course there is a television bleed and music and movies.  And 7-Eleven!  It is both a more formal and more straightforward culture (which is a big fat generalization of both American and Australian culture, since both are such huge countries, but you can’t write a blog like this without an opinion of some kind).  Americans typically take a lot of care in choosing words, trying not to offend or get to far into someone’s space.   While Aussies do seem to have the same big body space needs Americans (especially Westerners) tend to really like, the straightforwardness of statements can be a little startling, just as it is in England.

–that I will not feel like the Valkyrie from some opera, as I do sometimes in France and Italy, where I am sometimes bigger than the guys, never mind the women.

I did not feel like a Valyrie.  In fact, I met more than a handful of women who were well over six feet tall.  Also, really sturdy men.  Good looking men.  I said to a woman next to me at a meal that I’d been startled, walking around Melbourne, at just how many very good looking men I saw.   “Well, we are known for that,” she said.

What I want to know more about:

Australian history and the patterns of settlement.   The Great Barrier Reef and the history of Cairns.  The intrepid explorers who sailed all over the Indian Ocean and around the Pacific, looking for continents and new discoveries.  I get that their footprint was a disaster for native people.   But I’m smitten by the botanists and the scientists and geographers who were mapping the world, making connections, uncovering entire bodies of knowledge that had never been known by western man before.   What must that have been like?  Imagine, right now, if there was suddenly an entirely new continent discovered, with entirely different birds and animals and all manner of wondrous new things.  What would that be like?

I want to read more about the Outback, too, and the people who live there and how they live and what it’s like to inhabit such a vast landscape.

I didn’t know I would fall so in love with Australia.  That I would find myself so enchanted by everything about it and so hungry to know more.  You think you might get a place out of your system when you visit, but I just want to return and know more, explore more, dive in more deeply.

Happily, it’s only a plane ride away, and I will be going back.  Yessirree.

Thanks for going along with me.

5 thoughts on “Australia Wrap Up”