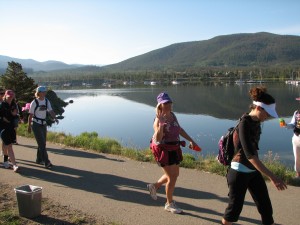 This is me, starting out this morning in Dillon, Colorado on the second leg of the Avon Breast Cancer Walk in the Rocky Mountains. As you can see, the scenery was well worth every single step, all by itself.

Far more worthwhile were the stories I heard along the way, and the tags I read on the backs of other walkers: This is for my mother. Sister. Best friend. Myself. “The beautiful brown-haired woman walking next to me.”

Sunburn: none, since I took care of my high-altitude sunburn much earlier in the season. 🙂 Excruciating sunburns I saw on pale skin unused to this sunshine: many

Pictures I erased because I thought I looked too fat for public consumption: 5

Women I met who had had double mastectomies, thereby making me ashamed of ever worrying about how I look instead of how healthy I am: 3

Favorite sign: Big or small, save ’em all, which just made me giggle for ages

New friends I made on the walk: 5

Fundraising total: $1936, largely due to you, all of you out there in blog land and reader land. THANK YOU SO MUCH!!!

The story of the weekend:

As we approached the finish line, a young woman next to me said, “This is your first walk, right?” I said it was. She smiled and said, “don’t be surprised if you cry.”

I think I was too tired to cry right then, honestly. I wasn’t thinking about anything except the ice cream they promised was waiting at the end, and taking off my shoes and finally going home to sleep in my own bed after almost ten days on the road.

But now, as I try to sort through the images, the moments, the stories that will somehow sum up what this is all about, I find myself enormously emotional and overwhelmed. I think of the woman, with her spiked, streaked hair, who was walking in front of me at one point. We started talking. She told me about her sister, Cookie, and said today would have been her birthday, if she had not died of breast cancer seven years ago in her early 40s.

I am an athletic person and in love with walking, and this was hard work for me. So I was deeply moved by women I saw who were struggling to finish the first five miles, much less all of them. That takes courage and bravery and a lot of fortitude. There were athletes, too, stringy and strong, powering through, encouraging others to keep going, keep moving, believe. A woman of nearly 70 has now walked almost 100 walks and raised 3 MILLION dollars. Imagine how many lives her efforts have prolonged or saved.

Tonight, I am exhausted and my dog is not leaving my foot until he makes sure I’m not leaving again soon. But this was one of the most rewarding things I’ve ever done and I will be doing it again next year. I hope some of you will think about doing it yourself.

And again, thank you so much for your support. Next year, I’ll find other sources. 🙂